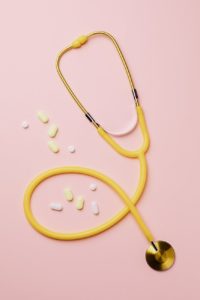 Eczema Society of Canada recently conducted an online survey and a series of interviews to better understand the patient perspective regarding the use of systemic therapies for atopic dermatitis (AD). The survey gathered a total of 299 responses from adult eczema patients and the caregivers of children with AD from across Canada.

AD (often referred to as eczema) is a chronic inflammatory skin condition characterized by dry, itchy skin. Patients with AD experience flares during which their skin becomes red with lesions that rash, blister, ooze, and crust. AD is a spectrum condition and can range from mild to severe, and some forms of AD can be debilitating and life altering.

The mainstay of therapy for AD is frequent moisturizing of the skin, along with topical treatments. For some patients with a moderate to severe form of the disease, despite adherent treatment, topical therapy does not adequately control their disease. For these individuals, systemic medications are sometimes used.

WHAT ARE SYSTEMIC THERAPIES?

Systemic therapies are used when AD is widespread and/or does not respond to topical therapy. They include pills taken by mouth, injections in the skin, or phototherapy/light therapy.

Examples of systemic therapies include:

Among adult respondents the survey revealed that while systemic corticosteroids (e.g. prednisone) were the most frequently used systemic medications for AD (used by 51% of respondents), they also rated highest in safety concerns for patients. While 45% of adult patients reported that systemic corticosteroids manage their condition very well in the short term, patients reported their doctor did not recommend their long-term use. While systemic corticosteroids can be effective to control symptoms in the short term, they are not recommended for long-term use, and even short-term use carries risks of adverse affects. Phototherapy was the second most common systemic therapy used, with 49% of adult respondents having tried it, however most reported it did not work well to manage their AD in the long term.

Methotrexate was another commonly used systemic therapy (used by 27% of adult respondents). While some patients reported being somewhat well managed by this treatment, long-term safety concerns hinder the extended use of this medication for chronic AD. The fourth most common systemic therapy reported was biologic therapy (presently, the only available biologic therapy approved in Canada for the treatment of AD is dupilumab), with 27% of adult respondents having tried it. Of those who have taken it, 80% agreed or strongly agreed that it has contributed to the optimal management of their AD. 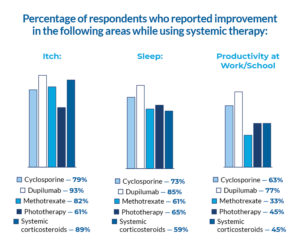 The top five symptoms of AD that negatively affect adults and children were reported as:

This data highlights the unmet need for effective, long term, and safe therapies for chronic AD.

“My doctor recommended an oral pill that is not approved for eczema. She told me I couldn’t stay on it for longer than a year, as it could cause serious organ damage. How is this the best that we can do? It feels hopeless.”

“This disease has plagued our son and our family since he was a baby. He’s itchy all the time, takes prednisone with no real effect, and never gets a break from his disease. We dream that he can one day just play a sport or jump in a pool without a major flare and bleeding skin.”

– Father of an adolescent with AD

As new therapies like dupilumab become available, access to these medications becomes a concern for patients. Treatment breakthroughs are bringing new hope to patients and their families; however, these advancements won’t help if the people who need them most can’t afford or access them.

The burden of AD can be significant and debilitating. ESC urges decision-makers to listen to the needs of our community, especially those living with severe forms of AD for which current therapies are inadequate, and support funding and access to new treatments

A chronic condition such as AD needs treatments that are safe and effective over the long term. To learn more, visit eczemahelp.ca/get-involved.